The artist had submitted two pieces of art to the Howland Cultural Centre in Beacon, New York, for a Members Art Show and Sale exhibition, both of which had been accepted. On opening day, she walked into the gallery only to find her Pricktator artwork had been removed with no notice from the exhibition and was standing on a private office floor.

According to Mid Hudson News, the centre has stated that the artwork had been removed because of IRS regulations which forbid the place from explicitly endorse or oppose any political candidate, but Isaza believes the decision depends on the influence of Republican members of the board and feels her rights to expression have been infringed.

“[…] this piece was unconnected to any campaign. It was created in the summer of 2018. The Swamp king Pricktator was created out of the rage I could no longer contain. Criminal abuse of immigrant children in McAllen, Texas was the last straw. I wanted the world to see his ugliness!” Isaza argues. 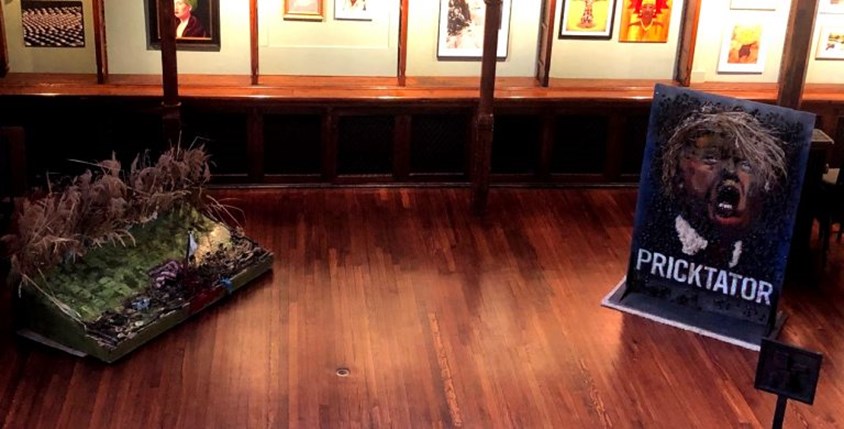 Patricia Isaza sees herself as a multidisciplinary graphic designer with 25 years of experience, experimenting “in many mediums, expressing myself through various objects/materials, including digital. I expect my mixed media pieces to provoke, making you ask, what am I looking at?” This is reflected in Pricktator, as “the materials used in this piece (with the exception of the varnishes and the insulation board on which it is mounted, light-weight and shallow like the man himself) were collected in our own New York State swamp the once beautiful Hudson River, now again thanks to ‘The Swamp King’, open to polluters”.

Isaza feels strongly about the role of art in politics and society. “I have defended the First Amendment rights throughout my career. I’ve made it my mission to protect these rights— to create visual history of a time of unrest in America. It’s more important than ever to have artists respond with art as disturbing as the times we live in. We need to show how we can enrage and engage the public; whether you hate it or love it– that is up to you,” the artist told Freemuse. 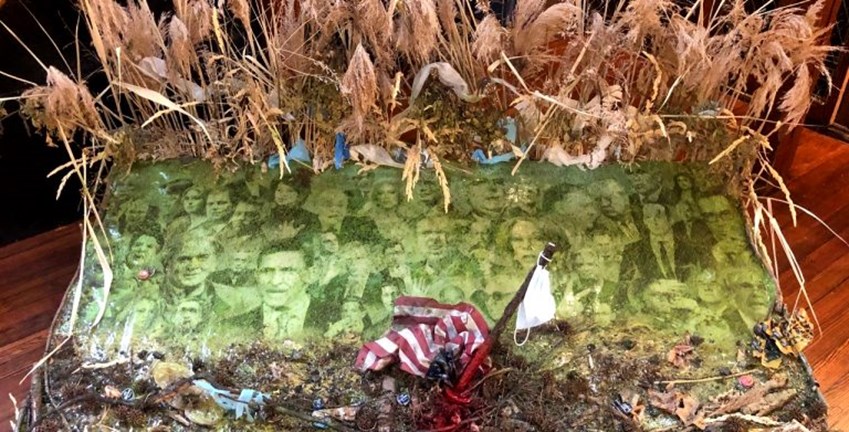 The artist goes on to describe the review process of the board. “Some folks almost quit over the censorship within the organisation. They had to follow up with a lawyer. They were interviewed by Todd Bender, Midhudson News, and after much back and forth, they re-installed the artwork the following weekend. A disclaimer was placed at the entrance of the gallery,” she explains.

When asked whether this censorship might impact her future work, she replies with a hard “no”. “It gave me more of a push to create MORE artwork!”

Instances of political censorship have become more frequent under the presidency of Donald Trump, as you can read in-depth in Freemuse’s State of Artistic Freedom 2020 report.