Interview with Belfast-based artist Wee Nuls, whose mural was destroyed

13 March 2021: A mural supporting a campaign for free period products created on a private building in Belfast was covered in black paint just a few days after International Women’s Day, reported Belfast Live.

According to the artist, the creation of the mural at this specific time was special, in light of the government’s decision to introduce free period products in “schools, youth groups and leisure centres by September 2021.”

“I was truly devastated to see that it had been painted over with black paint like that […],” Wee Nuls told Freemuse, adding that in the street art world it is not unusual to have artwork painted over.

Wee Nuls had her murals painted over with another artwork in the past, which she considers a way of sharing the public space with other street artists.

“But the fact that my work was painted over with black paint felt quite violent to me,” Wee Nuls said. 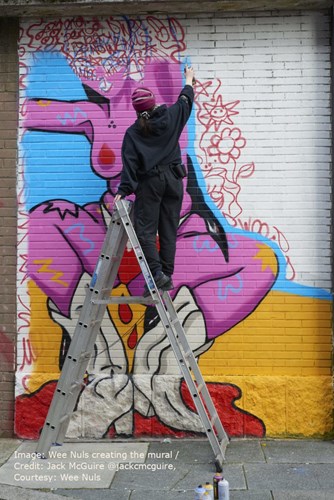 The artist confirmed that the mural was not painted over by the city council or the building’s owners. Vandals responsible for defacing the artwork are not known, and Wee Nuls speculates that the action was carried out by an individual who found the mural offensive.

Wee Nuls is an artist primarily focused on digital and street art. She is inspired by powerful women and creates characters that are sex and body positive.

“Since my mural was painted over, I feel even more motivated to create work that raises awareness for causes and issues that affect the people that I draw inspiration from,” Wee Nuls said.